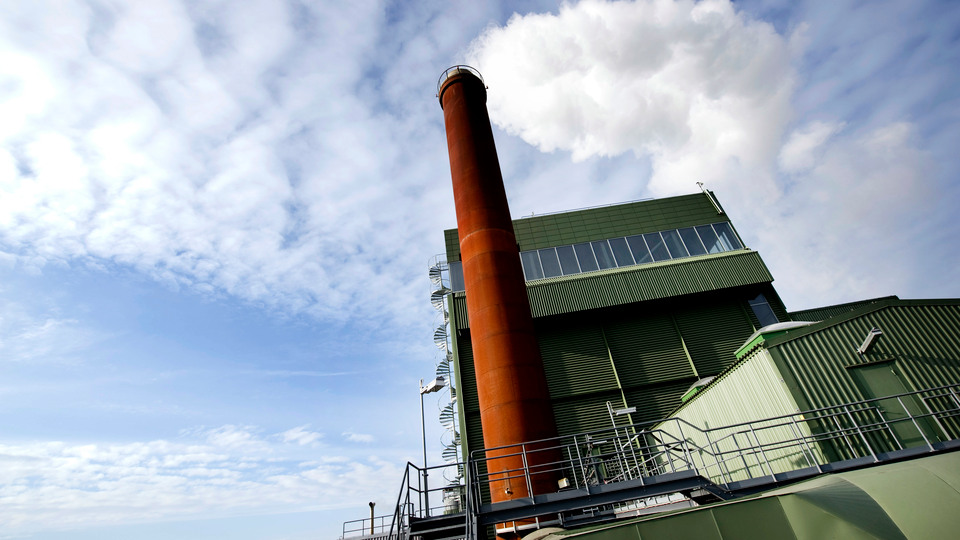 Capturing carbon dioxide from cogeneration (CHP) plants and adding hydrogen makes it possible to manufacture aviation fuel that generates up to 86 per cent less carbon dioxide emissions than comparable fossil alternatives. This can be done at a highly competitive price point. This is the conclusion reached by a joint research project between IVL, Jämtkraft, Chalmers University of Technology and Lund University.

– This is an extremely positive result. Aviation fuel produced in this way can be a renewable alternative with great potential for reducing aviation emissions of greenhouse gases, says Anton Fagerström, project manager at IVL Swedish Environmental Research Institute.

The project has examined conditions for launching large-scale production of renewable aviation fuel, so-called biojet, in Sweden. This based on Jämtkraft’s CHP plant in Lugnvik, outside Östersund. In the process, carbon dioxide from the venting chimney is captured and mixed with hydrogen produced from renewable electricity to produce electrofuel that can be used to serve the existing aircraft fleet. Two synthesis pathways have been evaluated and both show promising results.

Renewable energy is a prerequisite

Aviation fuel manufactured in this way has a low impact on both the climate and environment. Emissions of carbon dioxide are between 9–16 g per MJ of fuel – up to 86 per cent less carbon dioxide emissions than comparable fossil alternatives. About 40 per cent of the production is projected for use as aviation fuel, the remainder as renewable fuels in the form of petrol and diesel.

– It is important to point out that these results apply to conditions here at the cogeneration plant in Östersund, the resource efficiency and sustainability of the fuel actually depends on several factors – all raw materials must already be in place, incoming electricity and carbon dioxide must be exclusively sourced renewably and we must be able to maintain efficient process integration over time, says Anton Fagerström.

On a fully developed scale, the plant could produce just over 80,000 tonnes electrofuel, of which approximately 27,000 tonnes pump-ready biojet, approximately five per cent of aviation fuel consumption in Sweden. The cost of producing synthetic electrofuel is estimated to be approx. SEK 15-25 per litre.

The project has been completed and the results will be utilized going forward. Our goal is to have a plant in Östersund ready for the production of renewable electrofuel within five years.

– Our next step will be to investigate the practical conditions as well as possible partnerships in order to be able to offer renewable electric fuel that will contribute to climate change mitigation, regional development and provide good profitability for Jämtkraft, says Andreas Gyllenhammar, Head of Strategy, Innovation and Sustainability at Jämtkraft.

The project has been funded by the Swedish Energy Agency and implemented by IVL Swedish Environmental Institute, Jämtkraft, Chalmers, Lund University, the Nordic Initiative for Sustainable Aviation (NISA) and the Fly Green Fund (FGF). AFAB and Power Region have contributed relevant information to the various working groups.